Skip to content
Today is the UN International Day of Elimination of Racial Discrimination. It’s a time to stand up and speak out  against injustice and discrimination.

While there has been much discussion and debate over border issues in relation to Brexit, this has received little attention until now.  Most politicians who speak about the Common Travel Area agreement only speak in the context of Brexit and do not consider us in their conversations. Even though this discrimination has been going on for much longer. Ordinary citizens now push for change.
When we first planned this protest about the ‘invisible’ racist hard border, we were not sure what to expect. Especially as so many people in the island of Ireland are unaware of it. Also, over the past few weeks our social media has been relentlessly trolled about this campaign. But it was an enormous success with a great turnout.
Thank you to everyone who told their stories or stood in solidarity. Those who have shared and condemned this policy on social media and the many organisations who co-sponsored this event and campaign. 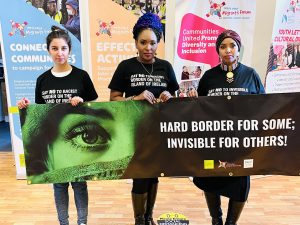 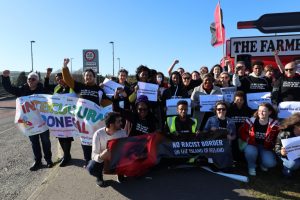 Our speakers were powerful. We heard from so many people with lived experiences of what it means to live in a country where racist policies are ignored. We heard how the CTA rules impact individuals and families and practical steps the Governments could take to make a change.
Most heartening was the – over 1000 – cars that stopped to take leaflets and car stickers from us. People showed a keen interest, slowing down to engage and ask questions, but also very shocked to hear that this policy existed in Ireland.  It is clear that the public is not aware of this policy and does not support it. We are determined to see this policy change and we know we enjoy public support.
If you are one of those we spoke to on Saturday – THANK YOU, thank you for giving us hope that things can change.
Will you join them? Will you take action to end this abhorrent and  dehumanising policy?
You can show your support by signing the North West Migrants Forum petition now;
https://www.nwmf.org.uk/common-travel-area-petition-north-west-migrants-forum/ 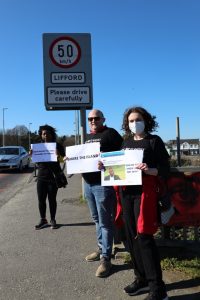 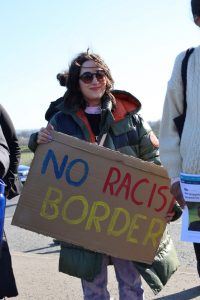 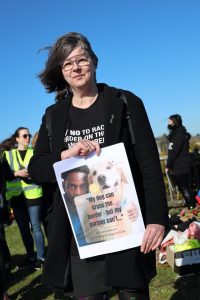 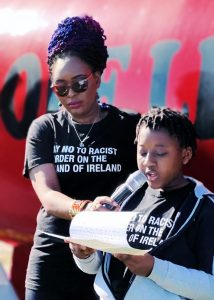 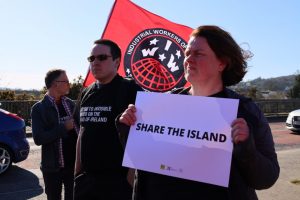 Although we had a wonderful day on Saturday, this is not the end – help us keep the momentum.

The next day of action is scheduled to take place on 30th April 2022 at the Border at Muff.

Please plan to join us!  Details will be released soon.