North West Migrant Forum (NWMF) is holding a Youth Culture and Peace Summit in a bid to explore and advocate for cultural diversity in Northern Ireland.

The online summit, which is taking place on two dates, 18th and 25th March, is open to young leaders, policymakers, members of the public, and anyone from the not-for-profit sector.

Topics that will be covered at the Summit include the promotion of inter-religious and intercultural dialogue, understanding and cooperation for peace; Political, religious, cultural & social issues that impact negatively on communities; The role of people & communities in promoting respect for cultural diversity; Understanding worldwide religious & social traditions; Examine the impact of the past on young people’s future.

Lilian Seenoi Barr, Director of Programmes at NWMF said, “We’re very excited to be hosting this Culture and Peace Summit on the 18th and 25th March.

A lot of attention is given to young people as agents of conflict and destruction rather than agents of peace. Considering that 26.6% of the population in Northern Ireland consists of young people, it is becoming increasingly important that we shift our focus on young people and see them as agents of peace, intercultural and inter-religious dialogue, and advocates for social cohesion in their communities. Our peace summit will aim to do just that and will seek to put them at the forefront of discussions geared towards promoting peace in Northern Ireland.

I am very honoured to work with a very diverse group of young people who are keen to play a role in promoting a peaceful and prosperous NI and I urge all young people and adults alike to participate fully in these discussions.” 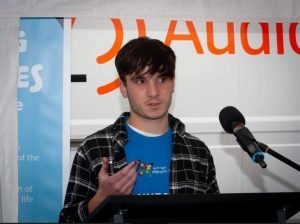 Liam McCauley, a member of the NWMF Youth Committee and one of the summit hosts said, “Now more than ever, it is vital for young people to actively engage in conversations on issues that impact our communities without the incendiary rhetoric that can often accompany them. This what our event aims to do, bring these conversations to the forefront and give young people like me a voice while doing so.”

Cara McAnaney, a member of the NWMF Youth Committee and another one of the summit hosts said, “In this day and age diversity should be the forefront of everything, as without it, we as a society cannot progress forward. At the NWMF, we strive to create a safe space for everyone and believe this summit is the starting point for change and will serve as an amazing learning opportunity for all who attend and we’d love you to join us.”

The 18th March summit is geared towards young people while the 25th March summit is an intergenerational event that will be led by young people. If you are interested in attending the summit, that is being hosted by NWMF’s Youth Culture Club, you can register at http://bit.ly/NWMFyoungpeopleSummit

The North West Migrants Forum was founded in February 2012 and is committed to promoting equal opportunities and protection for people of different ethnic backgrounds in Northern Ireland.